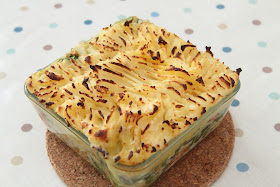 I don't know about you, but I get stuck in a rut with buying fish. I tend to stick to the same types for the same dishes: cod, haddock, mackerel, sardines and salmon. As far as Harry's concerned I first tried him with haddock, and then moved on to salmon - but haven't been more adventurous thus far. Well, until now. Sainsburys contacted me to ask if I'd be interested in switching the fish I use. Of course my thoughts turned to Harry.

Apparently 80% of fish sales in the UK are made up of salmon, tuna, haddock, cod or prawns. So to inspire the nation to enjoy a wider variety of fish, between the 10th - 23rd June if you ask for one of those at the fish counter you will be offered a portion of one of four alternative fish for free! The alternative fish are Sea bass, coley, hake or loch trout. According to my cousin Mark (the newly appointed fish guru for the Pantry - he of Leleu and Morris) coley and hake have the stronger sea fish flavour and go well in fish pies or fishcakes. Sea Bass is more delicate - so is one to fry off and serve as it is - perhaps with a fresh green salad? Loch trout is a bit more earthy. I chose hake after a quick chat with him. 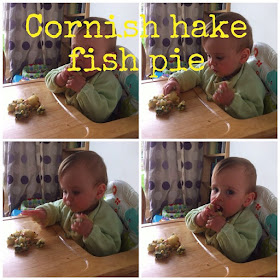 I thought I'd make Harry fish pie to try - he likes food that's wetter, as he seems to find it easier to chew, this meant working out if a roux would work using almond milk or Oatly cream - which fortunately it did. As you can see from the picture, the fish pie was a definite success. He had it for supper tonight, and I've frozen the leftovers in silicone cupcake cases so that we can just get one out of an afternoon and warm it through. 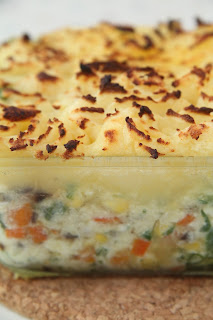 Preheat the oven to 200 degrees C
Peel, chop and cook the poatoes - then make mash, using Vitalite
In a saucepan poach the hake in about 100ml of the Oatly cream and 100ml of water
Add the carrot, sweetcorn (& peas if using). Simmer for about 10 minutes or untilthe fish is cooked through. I find if you give the pan a good stir a few times whilst it's cooking the fish breaks down into nice small flakes
Once this is cook, pop in a separate bowl while you use this pan to make a roux
Melt a dessert spoon of Vitalite, with the same amount of flour - mix over a low heat until it starts to sizzle - then add the rest of the Oatly cream.
Take off the heat and use the warmth of the pan to cook out the flour, stirring all the while to prevent lumps.
Add the fish and vegetables back in and give a good stir before adding a small grating of nutmeg and pepper.
Put the fish mixture in an ovenproof dish, top with the mashed potato and bake for 20 minutes until the top is crispy

I let this cool for about half an hour before serving Harry some up as we're still not keen on hot food as yet. He had this by itself - tipped on his tray and eaten with gusto. As you can see above.

So will you be switching your fish this month? Let me know if you do and if so what you cook with your free portion - I'm interested to hear! 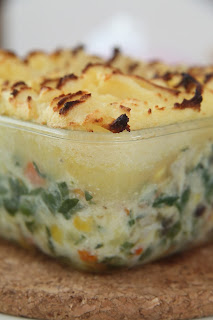