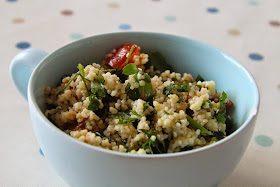 My healthy 2015 is going well, I'm losing weight slowly but steadily and am as active as my hips and back will allow. One of the bonuses of baby led weaning is that Harry and I seem to eat very healthily - lots of vegetables and next to no processed food. Despite a wet, cold and rainy morning the baby and I are eating an apple (he is very keen on eating what you eat) and I have a herbal tea.

Lunches however are my downfall - only of the things that happens if we're busy is that I skip lunch and end up trying to eat the entire kitchen before supper. I seem to be someone who needs to know that what I've got to eat is tasty and satisfying, the mugshots etc which can be so popular at Slimming World just don't tend to hit the mark for me, so I typically make a batch of something up for lunch that I can either eat from the fridge or as a pack up. This gets around the difficulty of finding things I can grab and go that are dairy and soya free as well.

This is more of a tabbouleh-esque recipe as it doesn't use bulghur wheat and is more of a guideline. I tend to have it with a piece of fish, or leftover chicken, or ham. The protein is important as I'm discovering that it's that that keeps the munchies away and stabilises my blood sugar (previous attempts at weightloss that have involved *ahem* skipping meals tend to fail when my blood sugar spirals into my ballet flats at about 3pm - see comment above about eating the entire kitchen). 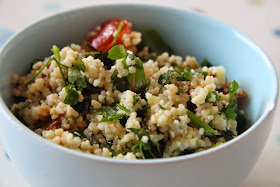 Put the couscous in a bowl with the 2 tsp of vegetable boillon and the grated garlic (you could use a stock cube, but I found 1 cube made it too salty) and the boiling water. Leave to absorb for about 15 minutes
Dice the cucumber and tomatoes
Finely chop the parsley, and the mint leaves - I don't worry about the parsley stalks, but pick the mint leaves first.
Zest the lemon, then juice
Add all the extra ingredients to the couscous, taste then season.
Serve with salmon, ham, chicken - anything really.

If you aren't being healthy, then add some extra virgin olive oil when you season this - 2 tablespoons should do nicely.

Of course you can use this as a base and add any and all veggies you like, chilli would be a nice addition too.
Penelope at 07:00
Share