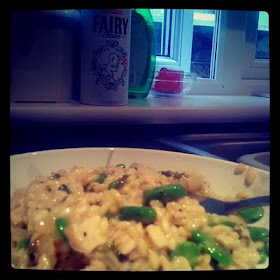 No, wait, that's not right. One of the reasons I'm drawn to the concept of a veg box is the way it pushes me to try new things, either vegetables I haven't cooked previously or ones I wouldn't necessarily buy if left to my own devices at the shops.
Broad beans are just one of those veg - I love them (I'm a double podding fiend) they're so green, verdant in their freshness. Their presence introducing the start of the summer, yet even yesterday when pottering around Waitrose, I completely forgot to pick any up. Riverford had sent me lots so, on Wednesay evening I returned home from work and made a start on double podding the Elphaba-esque vegetable.

To cook these (at this stage of the season) I just add them to the dish late on, but towards July or even later, they will need bringing to the boil. Oddly, like gnocchi, once they're floating at the top of the water in the pan, they're cooked - normally it only takes a few minutes.

I love broadbeans, blitzed with some light olive oil and a grated clove of garlic as a side dish for any main meal, or spread on thick slices of french bread, lightly toasted as you would for  bruschetta. However, this week required more gutsy, warming food as the rain was pelting down as though it were still April. Comfort food was called for, and what is more soothing and comforting than risotto.

I always use the same recipe for risotto, just substituting the flavours and herbs depending on what way I'm going with it. If you think of a basic risotto recipe as a 'bianco' and then you change up what you add to it depending on what you fancy/ have in the fridge.

1 onion, finely chopped
1 cup/ 250g arborio rice
1 glass white wine, I use a fairly dry one
Olive oil
Chicken/ vegetable stock - 500ml(ish) I use chicken stock that I make myself - eeking out the frugalness of my roast chicken even further.
Parmesan
Salt and Pepper
Butter

Sautee the onion in a little olive oil, cooking until it goes translucent.
Add the white wine into the hot pan, and let it bubble down, stirring all the while.
Heat your stock through in a separate pan, bringing it to a gentle boil
Add the stock, ladle by ladle, stirring until each is absorbed, and only then adding the next
Once your stock is all absorbed, check that your rice is cooked, it should be soft with a little bite (not mush!)
Remove the pan from the heat and add butter, grated parmesan and pepper. Taste, and if it needs it add salt. Parmesan is quite salty so sometimes you only need a little.

For the Broad bean risotto, I added a little garlic to the cooked onion (if you add it earlier it runs teh risk of burning), and lots of shredded mint, a little thyme and then the broadbeans at the end, just with the last ladle of stock.

I didn't use pecorino, but whilst I was cooking I thought how well this would have gone with the broad beans. The sharpness of the sheep's cheese contrasting with the soft sweetness of the little beans. I also didn't have any white wine in, as I don't tend to have it in the house, I diluted half a glass of sherry with water and used this at the same point in the dish as I would the wine. Similarly you could just add an extra 250ml of stock.

I had intended to add bacon to this, as I think the salty crispness of well cooked, crumbled in bacon would have been lovely - but I think it must have evaporated as there was none in the fridge, instead, I chopped up a chicken breast that was leftover from the previous night's Guide Division BBQ. It wasn't quite the same, flavour wise, but did provide some extra protein, and an extra dimension texture-wise.

I made this risotto in less than an hour (and that includes double podding millions of broad beans) so it's a perfect midweek dinner; tasty, soothing and on a wet, cold June evening - just what the doctor ordered.
Penelope at 10:00
Share